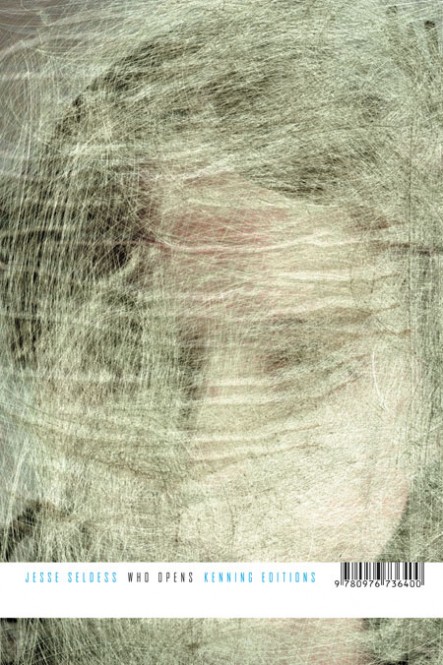 Jesse Seldess’ inimitable poetry has been widely published. WHO OPENS is his first full-length collection. Seldess was a founding curator of the acclaimed Chicago reading and performance series Discrete Series and has read his own work from New York to Paris. Antennae, the small press journal of which he is editor and publisher, is internationally recognized for publishing cutting edge music, poetry, and performance texts.


In Jesse Seldess’ poetry, words require a certain elasticity to perform an attentive music of formation. The manner in which phrasal units arrive, depart and recombine creates a movement like a flock of birds making a wide turn—there is a harmony of ever-shifting participants. The “who” of WHO OPENS is a similarly mobile designation—it is “who you have continually overheard” and what is itself being overheard. With great compassion and precision, this book returns language to the habitat of sound from which poetry has been away far too long.


These seven poems fit together with a perfect weave, three sets of twins (in each set, you might read the first as the sounding of themes, the second as a rhetorical raga exploring them) followed by a coda, as sweet as it is final. It is impossible not to read these poems aloud &, sounded, they are magnificent. Jesse Seldess has written a wonderful book.


A formalist poet who has found freedom in porous fixity…Seldess places all bets on the persistence of agency in a world of submission; on the strength of “chorus,” “chord,” “harmony,” and the meaning of voice.


Each poem here moves forward w/ banal yet lifeforce-infused lines which all seemingly relate to each other, then space out into meditations of repetition and some kind of language-prayer. Odd and affecting and issued by one of the more interesting small poetry presses currently (barely) active.


Complicated inner rhymes like Frank Loesser lyrics, so that in the final poem, we’re hearing “Hand talking/ by past will/ Tend” and in another few lines we’re into “talking by/ and walking by/ By fast will/ Hand,” so that we have to keep up with the sense quicker and quicker, yet the music of the line acts like a carrot in front of the reluctant donkey of the brain. Is it a spurious music? The advertising matter, and a little note at the back of the book, informs us that this poem, “Contact,” comes out of Seldess’ interaction (he says) with elderly people with Alzheimers and other memory diseases. (The promo copy uses the word “work,” as though Seldess had a job there among the old people, but the word “interaction” takes it away from the realm of the economic, and places him in a purer light, perhaps a sort of sounding board for people in trouble. And “interaction” implies a two way street more than “work,” as though they weren’t the only ones learning something, no, he was getting something too — besides a salary or hourly wage or whatever.) In any case the poem, “Contact,” stands almost like one of the free-standing rock formations, all crevices and juts, down in Monument Valley, its very otherness isolating it from the world of ordinary poetry, and yet making a satisfying climax to the six poems that precede it, which all depend on the peculiar satisfactions of improvisation, like a jazzman playing a melody “straight no chaser” once, then going to town thereafter.On the back of the book Kerri Sonnenberg is quoted as saying that in this poetry, words “require a certain elasticity to perform an attentive music of formation.” I sort of see what she means, for the words, in changing context, perform their own shimmering, wavery effects, but how do they “require” this elasticity? I would say that he, Seldess, lets the words “acquire” the elasticity to perform the “attentive music of formation” chiefly by the way he changes their context, back and forth, the simplest of words, from “pours” to “porous,” like those word games we played as children in which we were given the letters in “pours” then tossed another “O” and told to whisk it into the first word to reassemble another. You might take the title, “Who Opens,” add an “A” and come up with “Oh weapons,” if you were alert.I haven’t previously encountered Jesse Seldess’ wrtiting before, nor him as a person, but I’ve met Patrick Durgin, the proprietor of Kenning Editions, and read his poetry on frequent occasions, and I think I see a certain similarity between one of Durgin’s own modes of writing, and this recombinant DNA. Maybe I’m just imagining things after having the great freshness of one’s own vocabulary re-strung, freshly washed clothes pinned up to a rope to dry on a spring afternoon. I’m even looking at the picture on the cover of the book and seeing this face, with deepset dark eyes, scraped over by the winds of time and by metal tools, like me trying to read my lottery ticket by scraping away the black with the edge of a dime or a skate key.


This book feels almost more like a score for vocal performance than a conventionally lyric work for the page–that is, until you give yourself over to the silent reading process, at which point an imagined recitation begins suggesting itself with increasing insistency. Seldess’s sustained attention to the combinatory possibilities surrounding a few simple phrases is energetic and energizing.


Jesse Seldess’ new book Who Opens from Kenning Editions has [an] effect of concentrated energy, as if a villanelle had turned into a tornado made of light.“Who you have continually overheard” is a line that appears and reappears in various permutations, as do others.“As what you headed toward youSaturated unvocalized light”You find you are cross-examining yourself as to where you were and what you were thinking when you last read that line. Then you are brought back to light or the idea of light or the word “light.” And the word material.“Breathing heavyYou worn material”…“Anything

So there is a minimal approach to who this reader is and what her materials might be. There are permutations. And there is this light.

If I ask myself, for the sake of the argument possibly being made in this blog, how or if these are a tonalist, I would say that the attention to sound is one aspect of what I think of as a tonalist. The dissonance is organized. The tone is intimate and yet impersonal. The work is lyric without being centered around an emotion or little story. Speech is suggested but is only one of a number of textures. Elena’s work is more narrative. Jesse’s work has a fractal feeling compared, in Kerri Sonnenberg’s blurb, to a flock of birds (that comment might constitute the only metaphor in (on) the book).

Once you read it you want to read it again.

“Emit matter to converse” the last line, sends you back to the opening line,

“Who you have continually overheard”

and, in turn, to the epigraph, from The Talmud:

“Everything is foreseen, yet freedom of choice is granted.“